Owlet Radiation Awareness: What You Need to Know

In today’s digital age, there are tons of nifty inventions on the market designed for watchful parents like yourself.

Today, we’re taking a close look at the Owlet Smart Sock and its potential problem with radiation.

It’s a wearable baby monitor that monitors your baby’s oxygen level and heart rate while they sleep. It provides the convenience of checking such levels via a smartphone app at any time.

So how exactly does it work?

And where does radiation come into play? 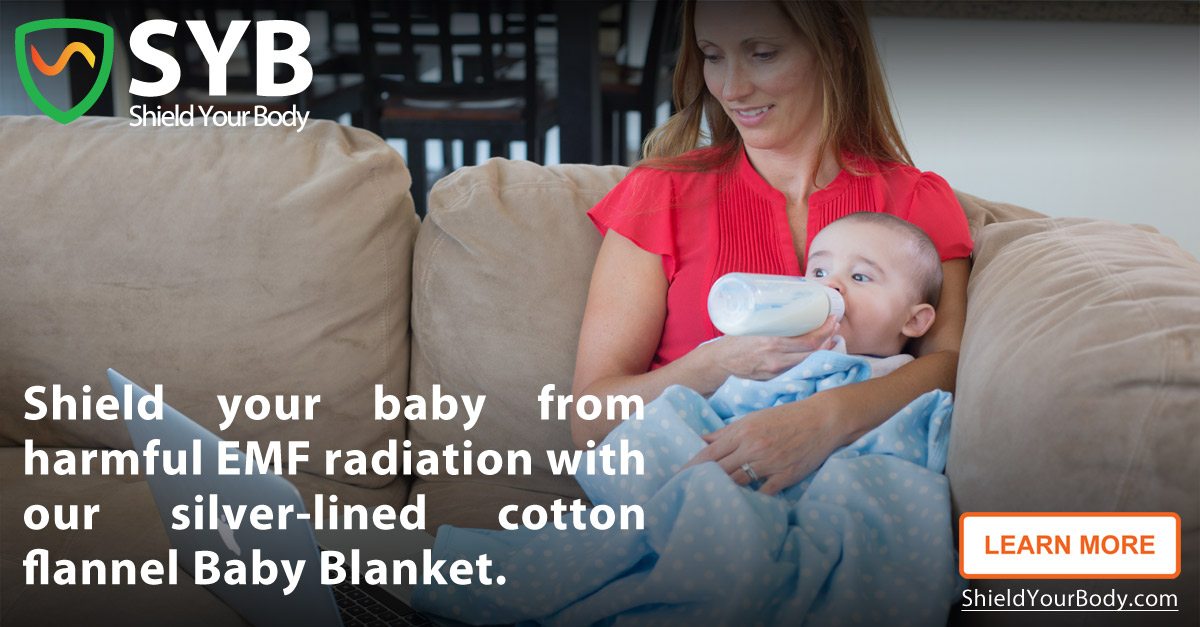 How the Owlet Smart Sock Works

To put it simply, the sock uses pulse oximetry, which sounds daunting but is actually just harmless light beamed through the baby’s skin in order to get readings of both their oxygen level and heart rate.

This pulse oximeter is completely safe and does not pose any danger whatsoever to your child.

US hospitals have used them as far back as 1987 and no dangerous effects have ever been observed.

The problem is found in how data is transferred from the Smart Sock to your smartphone.

How it works is simple:

The base station connects to your wi-fi, which lets you see real-time updates and readings on your baby’s vitals.

You’ll be given a notification on your smartphone if any abnormalities are detected.

This all sounds pretty good so far! However, like everything else, it’s not without its risks.

For one, it’s easy to overlook the amount of electric and magnetic field (or EMF) radiation you may expose your newborn to.

Though there isn’t an alarming amount of EMF radiation involved, the concern comes when you consider that the device is literally pressed against the skin of your baby.

Aside from that, studies have shown that the younger the child is, the more vulnerable they are to the effects of EMF radiation.

However, according to Owlet, the radiation levels emitted by the Smart Sock is actually twenty times below the amount that’s generated by one of the top culprits of EMF radiation –  cellphones.

Though that does sound like a relief, there are still some things to consider before you jump in completely.

Since the Owlet Smart Sock is monitoring your baby’s vitals round the clock and transmitting data through both the base station and the phone, radiation is being emitted constantly.

Plus, given that the device is literally pressed against your child’s body, then the exposure to radiation is exacerbated.

When you take into consideration how young and susceptible children are, you can understand why we should take a closer look at technology such as wearable baby monitors.

Another thing to consider is the heat that’s going to be radiating from these devices.

We’ve all experienced how hot our smartphones or laptops get after using them for a while.

The Smart Sock is no different.

And just to reiterate, babies are vulnerable—their skin is extremely sensitive. They are often incapable of rolling over if they feel it’s getting too hot.

If the problem persists, it may result in uncomfortable splotches on baby’s skin.

What Do The Experts Say?

Doctors, pediatricians, and EMF researchers have a lot to say about wearable monitors like the Owlet Smart Sock.

Dr. David Carpenter, Director of the Institute for Health and the Environment – University of Albany:

Notifications from the base station often end up being false alarms. But because the device supposedly detected an abnormality, worried and frantic parents will take their babies to a hospital for unnecessary and potentially even harmful tests.

According to Dr. Bonafide, these false alarms may be caused by babies simply making movements such as rolling over or kicking their feet.

Otherwise, it could simply just be harmless and completely normal activity in their vitals that the device mistakenly perceives as dangerous. In his opinion in regard to parents using the Smart Sock, “the risks outweigh the benefits”.

The American Academy of Pediatrics are concerned about the repercussions that might be caused by these smart devices:

Dr. Rachel Moon, Head of pediatrics at the University of Virginia School of Medicine and Chairman of the AAP’s Task Force on SIDS:

Parents may no longer feel the need to follow the right cautionary steps to prevent unfortunate deaths from Sudden Infant Death Syndrome. We’re worried people will become complacent. If they have a monitor they might feel they can put their baby on his or her belly to sleep, or sleep with their baby.”

In response to these standpoints, Owlet assures the public that their company has performed “extensive product safety testing” and that the Smart Sock complies with the requirements of the Consumer Product Safety Commission.

The medical director of Owlet Baby Care, Ken Ward, has even revealed that a medical version of the Smart Sock has been submitted and is currently under review by the FDA.

According to Ward, Owlet is actively determining and finding a solution to these concerns.

Owlet radiation is certainly a concern, but in some cases, the pros may outweigh the risks.

There have been several accounts from parents that have expressed their belief that the device saved their child’s life.

They were notified that their babies had stopped breathing, and they were able to save them just in time.

Of course, those odds of life-threatening situations are few and far between.

Still, for some parents the ability to see baby’s vitals and the sense of assurance and security that comes with that is worth the minor exposure to radiation.

Is There a Safer Alternative to the Owlet Sock?

There is a good compromise that offers audible and/or visible monitoring with far less radiation output:

It allows you to continuously check on your baby and is placed away from the crib.

In general, wireless baby monitors emit high levels of EMF, but there are some low EMF options you can check out here.

Final Verdict: Is Owlet Radiation Something to Be Concerned About?

Most things in life come with a set of risks that have to be weighed appropriately.

The number one priority of companies like Owlet is your child’s safety.

Many people swear by wearable baby monitors, while some find them unnecessary and even harmful.

Here’s a deeper review by Dad Verb from YouTube to help you consider all the pros and cons of the Smart Sock:

Owlet radiation is definitely something to consider. I personally wouldn’t use it with my baby. I’ve just seen too much research on the dangers of EMFs to do otherwise.

However, if my baby had a life-threatening condition or some other variable, the benefits would be more than the risks.

And that’s a decision every parent will have to make for themselves and their children.