Side Effects of Keeping a Laptop on Your Stomach

Sitting up straight at a desk isn’t exactly relaxing. Sometimes you just want to lie down and work couch potato style.

These days, laptops are extremely compact and lightweight, so similar to a smartphone or a tablet, you can use them in a variety of positions.

Sitting down and actually using your laptop on your lap is common but another thing that people do is lie down and work with laptops on their stomachs.

The difference between these two positions and using your laptop at your desk is the contact with your body.

While you are exposed when you are sitting at your desk, you’re even more vulnerable with the laptop resting on top of your body.

Numerous studies have concluded or suggested that laptop radiation has adverse effects on the body.

It’s best to keep them at a distance. 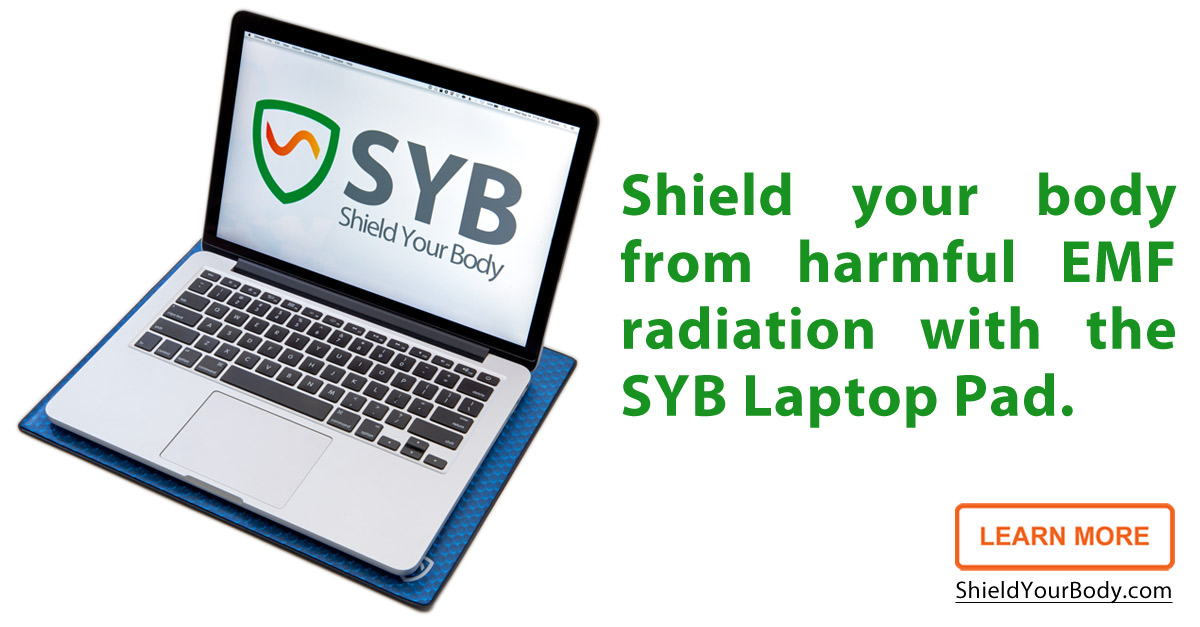 Where Does the Harm Come From? Laptop Radiation Explained

Laptops create an electromagnetic field (EMF) and use radiofrequency (RF) similar to cellphones and other smart devices.

They also connect wirelessly to the Internet, and many of them use Bluetooth.

Both of these wireless connections produce RF radiation. Then there’s the EMF radiation that comes from the laptop’s monitor and motherboard.

There are also lower-frequency radiations that come from the hard drive and the processor, among other places.

Scientists have been studying the biological effects of RF radiation for many years, and it’s clear that there are negative side effects.

Just some of the symptoms include:

Another thing to keep in mind is that RF radiation decreases rapidly with distance.

When your laptop is on your stomach, the radiation is the strongest. By working at a desk, you at least weaken the intensity of the radiation.

Radiation isn’t the only story here though.

Laptops also get hot, and the heat can be harmful when pressed against your body.

Older laptops with less advanced cooling systems are especially harmful, but even modern laptops in general cool better when they are on a flat, even surface.

Here’s a quick video of just how much radiation is emitted from laptops:

Dangers of Working with a Laptop on Your Stomach

Some of the more severe consequences of working with a laptop on your stomach include the following:

Erythema ab igne, or toasted skin syndrome, is a skin condition that produces red marks on the skin. Itchiness and burning sensations sometimes accompany the markings as well.

Prolonged exposure to heat is the reason this happens.

Some laptops, especially those with large processors, can get very hot, which is why you should keep them away from your stomach and  thighs.

Another thing to keep in mind is that your laptop’s fans may not work as well if your laptop isn’t on a flat surface, which means it won’t cool down as fast.

The relationship between wireless smart devices and cancer has been studied extensively, and there is plenty of evidence showing adverse health effects from such devices – laptops included.

Some organizations, such as the International Agency for Research on Cancer (IARC), have labeled RF radiation — a product of using a laptop — a possible carcinogen.

A lot of this has to do with RF radiation’s ability to heat up the body, similar to how a microwave heats up food, and this can have a number of biological effects.

There is also evidence to suggest that exposure to this radiation can affect DNA, bodily tissue, calcium, and a number of other things in the body.

Scientists have conducted both lab tests and studies in people to come to these conclusions, and while the results are sometimes unclear, there’s always a lingering concern.

For years, there has been concern that laptops create fertility issues, particularly in men, when used on the stomach or lap for long periods of time.

The discussion has revolved around the heat that laptops produce.

Granted, today’s laptops have more advanced cooling systems, but this doesn’t mean you should be unaware of the potential risk.

For men, exposure to heat in the area of the testicles has been known to affect fertility and the quality of the man’s sperm.

After all, the reason why men’s testicles exist outside of the body is that they were meant to be a few degrees cooler.

For women, there is a fear that the heat and radiation from laptops can affect reproductive cycles.

It’s clear that the heat can affect fertility, but what’s less clear is how much heat is too much.

If you have a laptop that gets unusually hot, it’s probably best to keep it on a desk as often as you can.

Biological factors are the primary causes of miscarriages, but environmental factors also play a role.

Laptop EMF radiation is one of them.

While more experiments need to be conducted, an association between increased EMF exposure and increased risk of miscarriages does exist.

As long as there is even the slightest risk, it’s best to be cautious about where you place your laptop during pregnancy.

The harmful effects of EMF radiation are potentially more dangerous to unborn babies still in development and therefore extra sensitive to this form of radiation.

Exposure to radiation during certain stages of development has been linked to malformations, growth disorders, and malignant diseases among other things.

If you think about your body’s position when you are working with a laptop on your stomach, it’s bent in ways that it probably shouldn’t be.

Your back isn’t straight, and you’ve probably propped your head up to be able to see your screen, which strains your neck even more.

Working this way may feel comfortable at the time, but you’re essentially reinforcing a bad habit.

Long-term poor posture can lead to permanent curvature of the back.

Once that happens, you’re left with nagging back and neck pain.

Poor posture strains both your neck and back, creating tension in various places. Over time, this can lead to anatomical changes in your spine.

Poor posture also affects your muscles as well as the discs and joints in your back. Issues in these spaces can result in lifelong back pain.

All artificial light can throw off your sleep patterns, but laptops are one of those things that we tend to use at night and in the dark.

The human body naturally sets its sleep patterns according to the rising and setting of the sun, which of course is based on light.

When natural light begins to fade, the body produces hormones such as melatonin to prepare the body for sleep.

When artificial light is introduced, however, the body gets confused and the natural sleep cycle gets out of balance.

Blue light from cellphones and laptops is particularly powerful, and in addition to its effects on sleep, it can also produce eye strain and other side effects.

Blue light has even been shown to boost attention and increase reaction times, which are two things you do not want when you’re trying to sleep.

Blue light also suppresses melatonin production, so if you spend a lot of time on the computer at night, it’ll be harder to catch those Zs.

Damage to a cell’s genome is what initiates the majority of cancer types.

And since EMF and RF radiation are possible carcinogens, it’s important to investigate whether or not this radiation affects DNA.

Studies suggest that EMFs can actually penetrate the nucleus of a cell and interact with the DNA.

Upon entry, they can generate reactive oxygen species (ROS). That’s not necessarily bad, but when too much ROS is created, it can damage the cell’s membrane and impair anti-oxidative mechanisms in the body.

This enables the EMF to penetrate the nucleus and effectively break DNA strands, which is how some cancers get started.

Given that DNA possesses electronic conduction characteristics, there’s greater reactivity between DNA and EMFs, so reducing your exposure is critical.

How to Reduce Side Effects from Laptop Radiation

It’s not realistic to eliminate laptop use entirely.

So the next best thing is to take precautionary measures when you do use it.

With that said, here are a few tips to keep in mind:

Can you get cancer from a laptop on your belly?

Some researchers have posed the idea that “toasted skin syndrome” can eventually lead to skin cancer. This goes along with what we know about radiation heating tissues and altering cells. However, a link between cancer and laptops hasn’t been proven.

What happens if we keep a laptop on our stomach?

The most recognized threat is “toasted skin syndrome,” which results in red splotches on your skin. The scarier, more damaging threat – though not yet clinically proven – is damage to your cell. And as you probably know, mutated cells often lead to cancer.

Can a laptop damage your legs?

Not permanently, but like I’ve mentioned before, work with a laptop directly on your skin can lead to red, itchy patches.

Is it safe to place my laptop on a pillow then work with it on my lap?

As far as reducing radiation exposure, using a pillow is not going to provide protection. It may, however, prevent heat-related splotches on your skin. On the other hand, the pillow would more than likely block airflow to the laptop, which could cause it to overheat and damage internal hardware.

I hope this guide has opened your eyes to the dangers of working with a laptop on your stomach. Despite its name, it really is best to use a laptop on a desk or table with some sort of shield.

As always, ask any questions in the comments below & I’ll answer!

Read next: The Threat of Computer Monitor Radiation & How You Can Protect Yourself