So you love your smartphone but hate the radiation it emits…what do you do?

Well, based off the principle that radiation dissipates with distance, people have been encouraged to use some sort of headset or headphones when taking a call or listening to music.

But there’s a catch…

That could actually magnify the radiation output – the total OPPOSITE of what you’re trying to do.

So what’s the solution?

Today I want to give you the pros and cons of using Bluetooth vs wired headphones regarding radiation so that you can make an educated choice.

After comparing the two, I’ll also give you tips on finding safer solutions.

Most people are aware of the harmful effects of cellphone radiation, but the dangers of Bluetooth radiation are less obvious.

Bluetooth devices have grown popular because of wireless technology that allows communication and data transmission at a short distance.

This technology allows users to perform several tasks all at once, making it an easy and convenient option.

However, Bluetooth poses potential health risks because of the Radio Frequency (RF) radiation it uses to transmit data.

When you use Bluetooth headphones, RF radiation is continuously emitted.

This is a serious side effect of operation, especially for people who use Bluetooth consistently for long periods of time.

The radio frequency used by microwaves to cook food is the SAME frequency that your head is exposed to when using bluetooth headphones.

Several studies have discovered that RF radiation is possibly carcinogenic, meaning it can increase your risk of developing cancer.

The common misconception about Bluetooth is that it is safer than the radiation coming from cellphones.

However, that’s not true.

And even if something is safer than something else doesn’t make it safe.

Bluetooth actually operates on an even higher frequency than cellphones.

Apart from that, its constant RF signal poses a bigger threat than devices that may emit stronger RF radiation but for a shorter time.

Using Bluetooth headphones means that your eyes, ears, and brain are all exposed directly to radiation that can lead to things like headaches, neck pain, insomnia, and more.

If Bluetooth headphones pose a health risk, does that mean we should go back to using wired ones?

The short answer is not a simple yes.

Contrary to popular belief, when you connect your wired headphones to your phone, the radiation that is absorbed by your body isn’t lessened or blocked…

Instead, the RF radiation travels through the cord directly into your ear canal and head.

While most people believe that using corded headsets are a safer alternative to Bluetooth, recent studies have debunked this myth.

The truth is, wired headphones increase the brain’s exposure to radiation – sometimes as much as 3X the exposure.

Since wire cables contain metal, radiation is easily conducted from your cellphone.

The wires, therefore, act like antennas through which dangerous amounts of radiation are transmitted directly to your head.

So what options DO we have?

How to Make a Wired Headset Safer with Ferrite Beads

The good news is, there is a way to make wired headphones safer. The solution to reducing radiation exposure can be as simple as adding ferrite beads.

You’ve probably seen them before without knowing what they were: 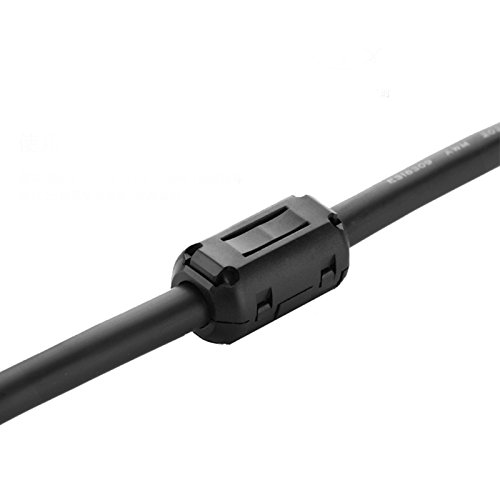 Ferrite beads are the cylindrical part of charger cords and other electronic devices with wires.

They are responsible for stopping high-frequency electricity and ensuring that frequency surges and spikes don’t destroy the electronic circuit boards of a device.

They won’t block it entirely, but ferrite beads can filter as much as 90+% of RF radiation that you would normally absorb, making your wired headset a lot safer.

Best of all, they are inexpensive and easy to add to your wires – you just connect it to the base of your headset.

When it comes to answering phone calls, we recommend using the speaker feature.

This way, you can prevent direct contact with radiation to your head.

However, if you really need a headset (like at work or while driving), the safer option is to use wired headphones that are equipped with ferrite beads.

Opting for Bluetooth devices just makes you more vulnerable to dangerous exposure from your phone.

An even safer option is to use air tube headphones, which emit next to no EMF radiation.

I like them because tests have shown that no EMF transmission takes place when using them.

As of today, they are considered the safest alternative for listening to your music and talking on the phone without worrying about dangerous radiation.

Let’s take a deeper look at how air tube headphones make your listening experience safer for you.

But its design and structure ensure that no EMF transmissions occur when used.

Here’s how they achieve that:

Instead of using traditional wires with metal, these earbuds are built with hollow air tubes for transmitting sound.

It also has a braided nylon cord that’s infused with copper – a “good” metal that actually aids in blocking Extremely Low-Frequency electrical signals.

Even better, since these headphones are equipped with air-filled hollow tubes, the device produces high-quality sounds with enhanced tone and acoustics.

Air tube headphones are also beneficial in that they place the speakers away from the head.

Other types of headsets have the speakers right against the ear.

Being a clever design, the speakers on air tube headphones convert electric signals to acoustic signals before they reach your head.

Once this conversion happens, the acoustic signals travel through its air tubes, which are hollow and flexible.

The sound then reaches the metal-free earbuds. With this setup, your listening experience will not only be better, but it will also spare you from risks of cellphone radiation.

Are wired earbuds safer than Bluetooth?

Yes. Although wired earphones and Bluetooth earbuds both pose a threat, the former can be used in a way where its harmful effects are minimized. By using wired earbuds with ferrite beads, you can significantly decrease your exposure. This makes wired earbuds a safer alternative.

No. Unlike what the majority believe, using a Bluetooth headset will only amplify the user’s exposure to harmful radiation from cellular devices.