Any other mamas wondering what in the world a belly blanket is?!

I thought it sounded a little outlandish at first, but then I did the research.

As parents, we will do anything for our children, and that protective love begins long before baby actually arrives.

If you’re looking to shield your baby from the dangers of Wi-Fi radiation, a belly blanket may be just what you need.

What Is a Belly Blanket?

A belly blanket serves as a protective blanket for a pregnant women and her unborn child.

It has an anti-radiation property that protects the baby inside the womb from harmful electric and magnetic fields. A baby’s exposure to this type of radiation can result in certain medical conditions when the baby is born or complications during the mother’s pregnancy.

There are several belly blankets on the market today, but one brand stands out above the rest: 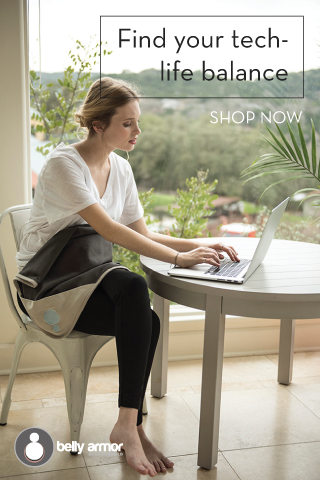 Who Is Belly Armor?

Belly Armor is a large and growing company that is available across more than 30 countries around the world.

They offer several products that help families reduce their exposure to EMF radiation. Their mission is to make the environment healthier and help people increase their knowledge about the health issues caused by wireless technology.

They also promote prenatal health issue awareness to keep the safety of both mom and baby front and center in society.

Belly Armor’s founder, Aileen Chen, was pregnant at the time when she became aware and conscious of radiation-emitting devices that surrounded her at home and at her work.

She wanted to help more people, particularly unborn babies, to be protected from radiation.

So she, along with the company’s co-founders, created Belly Armor as a resource for pregnant women across the globe who want to shield their babies from the ever-growing threat of electromagnetic radiation.

Belly Armor’s blanket is made with RadiaShield technology that is 99.9% effective in shielding your unborn baby from EMF radiation that’s produced by mobile phones, tablets, Wi-Fi, and other non-ionizing radiations.

When we say non-ionizing radiation, we’re referring to a type of low-energy radiation that does not have enough energy to ionize molecules.

Unlike ionizing radiation, this type of radiation is less likely to cause severe health conditions.

However, I still suggest that you try to minimize the exposure because there are still side effects for you, especially for your baby.

This blanket has a silver fiber that is known to help reduce the damage caused by exposure to radiation. The silver textile is like a 1/4-inch thick sheet of aluminum.

Research has been conducted on silver’s protective abilities that proved its effectiveness. The RadiaShield technology used in this special pregnancy blanket can prevent non-ionizing radiation ranging between 10MHz and 8GHz.

The effectiveness of this particular belly blanket by Belly Armor has been tested in third-party laboratories, and studies show that it is effective in minimizing radiation exposure.

Benefits of Using a Belly Blanket During Pregnancy

Exposure to EMF radiation can present unique challenges during pregnancy and to babies in the womb.

Using a belly blanket can protect your baby from surrounding radiation while your baby’s cells are rapidly growing.

Because the use of modern technology is unavoidable, aside from minimizing use when not needed, it is important to wear a protective shield, especially if you are pregnant.

A belly blanket serves as a barrier to avoid potential health risks and offers peace of mind to concerned parents.

Aside from health problems, too much exposure to radiation can cause miscarriage too. This is a sensitive subject for so many people, but unfortunately, this aspect of prenatal care is rarely discussed.

Wearing an anti-radiation belly blanket just provides an extra layer of protection – and peace of mind.

Fortunately, Belly Armor’s maternity blanket is lightweight and breathable, making it an easy, convenient addition to your lifestyle.

As an added bonus, once your child is born, you can use it as a baby blanket or nursing cover.

What Do Others Say? Product Reviews from Actual Users

The Belly Armor blanket is known by a lot of people in different countries. It has been used by many moms who are conscious about their unborn baby’s health.

If you would like to purchase this product or want to know how moms who bought this actually felt after their purchase, check out some of these belly blanket reviews:

“I’ve been aware of the EMF radiation for years but did not do anything to reduce my exposure. As I learned more about the danger and health risks of this radiation and noticed that there are a lot of radiation-producing items at home, I decided to buy this blanket so I can have a protective shield while using laptops and other gadgets. So far, I can notice the difference!”

“I used this product occasionally during my pregnancy, whenever I use my laptop or my phone resting on my belly. I’m currently using the blanket now as I hold my baby and play with electronics. It would be a nice gift for other moms or someone who uses a computer and gadgets a lot during and after pregnancy!”

“Great quality and very easy to wash. I just wash it the way I do with a regular laundry. I will also be using this for nursing when my baby is here.”

“I love this product! It’s beautiful, well-made and really works. I tested it using a cellphone and now it makes me feel that I’m really protecting my unborn child. I feel better and more confident when using it and will definitely recommend this item or would buy as a gift for a friend.”

While most are positive, not all belly blanket reviews are good. So that you get both sides of the story, here’s a snippet of what unhappy customers had to say:

“Does this blanket really need to cost almost $70? I appreciate the feeling of protecting my baby the best way I can, but I can’t help but feel like I’ve been “suckered” into something. The blanket is fairly thin with a shielded side and a regular cotton side. I did the cell phone test and it didn’t have a signal, so it passed that test. But really, $70? I don’t know if it’s worth it.”

“I bought this and did the cell phone test, and it worked, but I wanted to double check, so I measured radiation levels with my EMF meter. It did block EMF some, so that’s good, but I ran the same test with just a folded bath towel and rolled up t-shirt, and it blocked just as much. So if a rolled towel blocked just as much EMF, why did I just pay $70 for a blanket?”

So the primary complaints seem to be about the price.

Tips for Using It

If you decide to try it, make sure you do the cell phone test:

Never use an electronic or wireless device underneath the blanket. Always keep the blanket between you and the device. 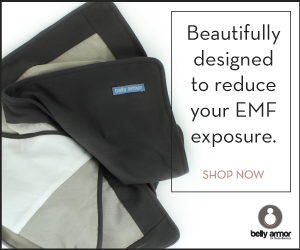 How Do I Know It’s Really Blocking Radiation? Is There Testing That Proves It Works?

This product has been tested and verified by third-party laboratories. If you want to do a self-test, you can conduct one by covering your phone will a blanket and see if it actually blocks the signal.

You can also do your own measurements using an EMF meter.

Do I Really Need a Belly Blanket?

It is recommended, especially if you are pregnant. It reduces the risk of miscarriage and developing abnormalities for the baby. If you are not yet pregnant but want to be, you can use it to help prevent infertility caused by EMF radiation.

What Are the Blanket's Dimensions?

Yes, it has been tested by FCC-certified labs in the U.S and results show that it has 99.9% effective as a non-ionizing radiation shield.

What Does the RadiaShield Fabric Consist Of?

It primarily consists of organic cotton, modal/rayon, and silver fiber, which is known to reduce the damage caused by exposure to radiation.

I hope this review helps you decide if you’d like to use a belly blanket while pregnant. I think it’s a fantastic option!

However, if you’re not feeling the whole blanket thing, there are several other ways you can shield your baby from EMF. Read about them here in our maternity guide!