When we think of EMF, most of us think of cell phones and such.

But unfortunately, light bulb EMF exists, and some are worst than others.

In today’s article, I highlight the “best” and “worst” lighting options.

Light Bulbs and EMF Radiation: Why Some Bulbs Are a Problem

You’d never think it, but light bulbs can actually be a source of electromagnetic fields (EMF).

Some types of light bulbs can emit pretty high levels of EMF radiation (thanks to new “smart” bulbs…more on that in a bit).

Prolonged exposure to EMF can cause all sorts of issues from headaches and irritability to more serious conditions like infertility and chronic illnesses.

I knew evvvverything was going “smart,” but light bulbs? Give me a break!

But alas, it’s happening. You can now get light bulbs that via WiFi and Bluetooth.

That same type of radiation (that emits from cell phones, tablets, ect) has been found to alter brain waves.

And THAT ultimately leads to hormonal and cellular changes. Biological effects can also include increased sperm damage and growth of gliomas.

Although, let me just pause here and say I don’t think the amount of EMF in a light bulb is enough to do any of those things.

I’m just stating the fact that the new smart bulbs emit the same radiofrequency waves as other Bluetooth-enabled devices.

But even if they’re not smart, many light bulbs generate dirty electricity.

Dirty electricity occurs when the normal flow of alternating electrical current is disrupted, causing electrical surges and irregular spikes along the wires.

Some data suggests dirty electricity is a potential cause of cancer and childhood leukemia.

LED (Light-Emitting Diode) lights are bulbs that make use of diodes to create light. 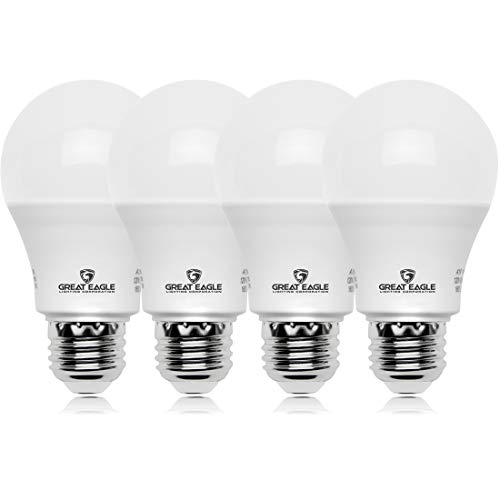 They contain a certain chip, usually made of gallium, aluminum, and arsenic – all of which are semiconducting materials.

Using this chip, the electrons from the electric current moves from a positive layer to a negative one. In this process, energy is released through photons.

LED lights are structured in such a way that when photons are directed outward, they can produce a steady light source.

On top of that, LED lights expose you to blue light, which lowers melatonin production and can affect your sleep.

These unhealthy sleeping patterns can eventually cause other illnesses and weaken your overall health.

There are also complaints about LED light noise.

This is appropriately termed “electromagnetic hum” and is produced by EM interferences or incorrect dimming.

CFL or Compact Fluorescent Light bulbs are generally less expensive and use less energy than other bulbs. 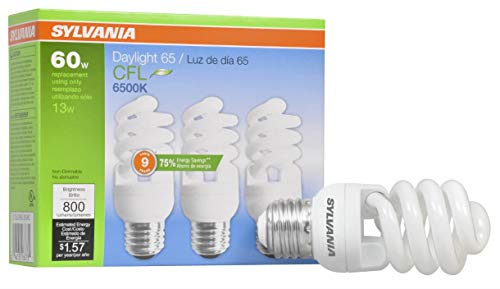 This type contains a glass tube coated in phosphorus, which contains mercury vapor and argon glass.

It is through this tube that electricity passes and interacts with mercury to produce a chemical reaction resulting in ultraviolet (UV) light.

Now, the UV light is not what we see.

Instead, the phosphorous coating is responsible for absorbing the UV so that the bulb can produce visible light.

CFL bulbs can also be a source of dirty electricity and high magnetic fields due to their electrical components.

Fluorescent lights are the usual option for homes, schools, warehouses, and offices.

These lights contain mercury-vapor gas which excites the electric current passing through and creates UV lights. 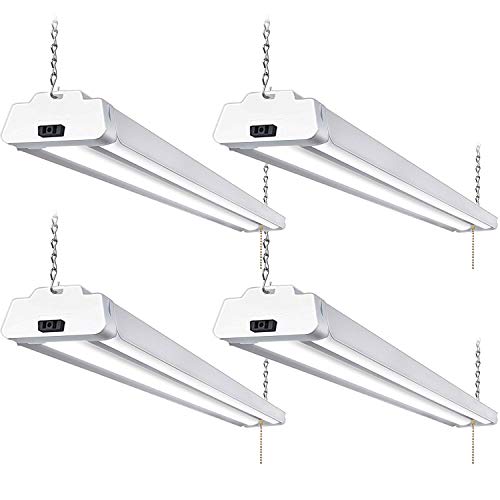 The fluorescent light bulbs have a particular coating that interacts with the UV light.

Once that interaction happens, the inside of the bulb’s tube glows and produces light that’s visible to us.

Although fluorescent lights use less electrical power than incandescent bulbs, they are more dangerous in terms of the radiation they produce.

Fluorescent lights operate through faster and shorter frequencies that can penetrate cells.

After long exposure to this, our bodies can experience negative effects and developmental disorders in our system.

The flickering of these bulbs is another huge problem.

I was SHOCKED (no pun intended) when I measured my kitchen lights with my TriField meter!

*runs to the store for new low EMF bulbs*

The concern here is that continuous flickering can cause symptoms in sensitive people like:

And that’s not pseudoscience. Just think about people who are prone to seizures. They’re often brought on by flickering lights…

Out of all the bulbs, the incandescent bulb is the simplest in design and is considered a standard light source.

The structure of the bulb is made up of a coil, which heats up when electricity passes through. 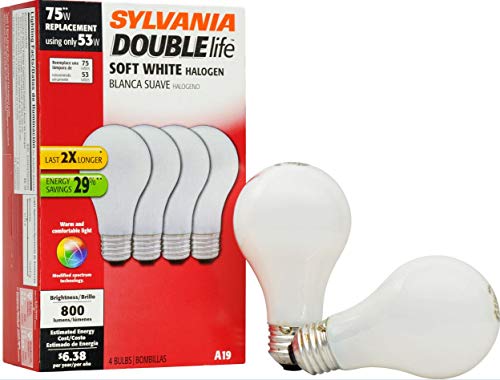 The inside of the bulb is filled with gas that prevents oxygen from combining with the metal.

The only thing wrong with this design is that most of the energy is allocated to creating heat more than producing light; therefore it’s not the most efficient.

The good news is that even though these are old-fashioned types of lights, they are the go-to low EMF option.

Plus, if you observe, you’ll notice incandescent lights produce a yellow or orange tinge – not blue.

And I’ve already mentioned the problems with blue light. With incandescent bulbs, that’s not an issue.

I’ve mentioned these already, but I think they deserve a section of their own in this article.

They’re called smart, of course, because they can be controlled via WiFi or Bluetooth technology.

Many of them use the internet for customizing and scheduling their “on” and “off” times.

But controlling your lights isn’t all you can do with smart light bulbs. You can also equip them with speakers, cameras, and a presence-sensing ability.

Cool, right? But here’s the catch…

Despite their convenience, they’re by far the biggest threat to your health out of all other lighting options.

That’s because their “connectivity” feature means they operate via radiofrequency waves. And RF radiation was classified as a Group 2B carcinogen by WHO in 2011…

And because they’re LED-based, they also create dirty electricity.

Then there’s the remote that controls them. If it doesn’t operate via infrared light, then it too emits EMFs.

Based on the comparison provided so far, we can safely assume that LED bulbs, CFL lamps, and fluorescent lights are possible sources of EMF.

They might be convenient and “eco-friendly” but they’re NOT “human health-friendly.”

LED bulbs, for example, are efficient in terms of operating in low voltage and using less energy to produce light.

However, this same light source has a power supply that converts 120 v AC to DC voltage – a process that produces dirty electricity and high levels of electromagnetic fields.

CFL lamps, which are recyclable, can cause more damage to people’s health and the environment because of their mercury.

Smart light bulbs should be avoided, too, because, despite their modern touch, they radiate a lot of EMF thanks to its radiofrequencies.

And finally, we have fluorescent lights, which may be less expensive than most bulbs, but are actually a source of UV radiation, high magnetic fields, AND a flicker risk.

Out of all the choices of bulbs, the safest and healthiest lighting would be incandescent light bulbs.

First of all, these bulbs produce little to no dirty electricity because their design matches the wiring of most homes.

Second, due to their simple setup (aka they’re not “smart”), they don’t create RF radiation.

These bulbs work the same way as standard incandescent bulbs, but they’re made from stronger material, thus lasting much longer and producing more light.

Unlike a typical incandescent bulb, the Halogen bulb produces a deeper orange color and doesn’t need time to warm up. So they’re a little more efficient, too.

The next best option would be LED light bulbs that do not have a transformer. The built-in transformer is the issue regarding dirty electricity.

I have seen some that don’t have the transformer and therefore produce much less dirty electricity.

Side note → If you want to decrease the dirty electricity in your home, check out my Dirty Electricity Filters Review.

If you’re just completely against using incandescent lights, at least consider the following as you shop for LEDs and other bulbs:

If you find yourself surrounded by hazardous types of lights, don’t worry!

You can still manage them so you can minimize your EMF exposure.

Here are some tips:

Subscribe to receive regular tips from BeatEMF on protecting yourself from EMF and gain INSTANT ACCESS to the Meter Guide (a printable pdf document).

And when you’re at the grocery store or a friend’s house, and there’s literally nothing you can do, distance is key.

So choose the seat away from the lamp. That sorta thing…

Final Verdict: Do light bulbs give off radiation?

Yes. Some light bulbs are designed in such a way that their mechanism creates EMF radiation or UV radiation.

The thing is…lights are all around us. Unless you work outside 9 hours a day, you’re most likely in the vicinity of artificial lighting most of the time.

That means your exposure to the EMF they emit is almost constant.

Ask me how I know…ugh.

The good thing we have going for us is that there is some distance between us and them since most lights are located on the ceiling.

What type of light bulb gives off UV rays?

They’re not going to jump off the ceiling and attack you, but LED bulbs do produce dirty electricity, blue light, and if they’re smart – radiofrequency radiation.

However, LED lights without the built-in transformer are a better, safer option.